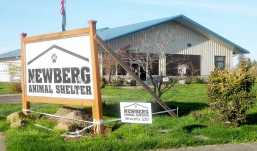 Every Friday I head over to the Newberg Animal Shelter for my standing date with cats from 4-6PM.  This is not glamorous work by any means. Basically, I do the afternoon feeding and cleaning of all the kitties in the shelter except the ones in the quarantine room.  I volunteered as I wanted to do something for the community and all things furry and four-legged who do not have a voice.

In the cacophony of barking, I say hello to the other shelter volunteers, then I greet the dogs in their kennels to see new arrivals and who has gotten adopted. In the storeroom, I don a grey Newberg Animal Shelter T-shirt and then proceed to the lobby and cat areas to get a count so I know how much food is needed. I grab a rolling cart and am off to the kitchen to prepare the cat food, get a pitcher of water and pick up cleaning supplies.

Kittens are kept in kennels in the lobby as well as some long term care adults. Sophie and Leo an attractive pair of long-haired white and black long-timers.  They have severe allergies, are on special food, and need to be adopted as a

pair. Renee, a spunky, mature black and white kitten has a large square wooden pen in the middle of the lobby floor.  A stray, she was found with her hind end was paralyzed. As a result, she can only drag herself around and has to wear a pet diaper as she has no sensation of when she needs to pee and poo. She has sponsors who pay for acupuncture and physical therapy for her. Oddly she is the happiest cat I have ever seen.  When let loose she quickly drags herself all around the lobby exploring.

This is a no-kill shelter.  These animals are loved and cared for until someone with a big heart steps in to adopt them.  Often there is no or little fee to do so. When I first started, I used to get depressed when I saw senior dogs and cats surrendered by their owners for various reasons usually for the owner’s medical, financial issues or moving to a new residence which did not allow pets.  Then one of the other volunteers told me not to worry, that they would find loving homes. Sure enough, they do. If not, they will spend the rest of the days at the shelter in loving hands. This shelter also has cooperative agreements with shelters in other parts of the country who are overflowing.  Shipments of dogs and cats come in from California, Texas and as far away as Hawaii. After Hurricane Michael in the fall of 2018, we had a large shipment of dogs and cats from Georgia so the local shelters could make room for all the misplaced animals due to the storm.

I make my way to the two cat rooms.  Adult cats can roam freely here. They have ample bedding, toys, litter boxes, cozy places and perches to make them comfortable.  My last stop is the nursery where cats that are recovering from spay and neutering, urinary or respiratory infections are kept until they are recovered enough to be put up for adoption.  I take the time to hug or at least pet the cats that are too shy for too much contact.

Years ago the shelter was run by the City of Newberg in another location, a small, dismal cinderblock affair. My then 5-year-old son and I adopted our cat, Emmy there.  Emmy had her mug shot in the local paper as a 6-month-old long haired tabby cat who did not

prefer the company of other cats. Perfect! A self-limiting cat. She provided us with 12 years of love and laughter and her memory still lingers in us.

Eventually, Darlene, the dedicated city animal control officer retired.  The city did not want to fund animal control efforts anymore. The Friends of Newberg Animal Shelter stepped up and funded a new building and eventually purchased the land that the City of Newberg previously had lent.   This effort was solely funded by donations and fundraisers. The shelter opened its doors in 2015.

The shelter is run by a volunteer board, one paid director and several vet techs. that are paid employees.  The rest of the labor is provided by volunteers from the community. There are volunteers that come to clean, feed the cats and walk the dogs twice daily. Individuals and families foster newborn puppies, kittens, and animals that need extra

medical care. There are some that work with animals with bad habits or who need socialization. Some individuals step up as sponsors to fund extra medical care. I will soon be joining the outreach team to bring animals to senior centers and adoption events on the weekends at local pet stores. Some community members supply the small retail area with handmade accessory items for the animals.  Local vets volunteer their time to care for sick and injured animals as well as neuter and microchip them.  The pet chains Petco and Petsmart donate literally tons of pet food and cat litter. Then the shelter has its own outreach providing pet food to those families in the community that are in financial need.

I’ve been working at the shelter for only several months but already have had some interesting memories.  The first day I arrived out walked a mom with her 4-year-old red headed son. He was sporting a grin that expanded off his face as he was muscling a cardboard cat carrier.  “ I have a new kitten!” he exclaimed to me. I remember so well the delight my son had when we adopted Emmy. Once I witnessed a couple come in to surrender a big beautiful, young mixed breed dog.  The man sat at a chair in the lobby and sobbed while his wife resolutely filled out the paperwork. It was sad but obviously, the pair did not have the right skills and home for the dog. Two days later it was adopted. Frequently I walk by the kennels and see volunteers sitting on the floor spending time with the often anxious dogs wondering where their old home is.

Last Friday after completing my shift, I climbed in my car with the radio blaring the usual gloom and doom.  It occurred to me at that moment that amazing things are happening in the world and that some of them are right under our noses.  They just don’t get the press and sensationalism that drives our media. At the shelter, there is no government involved, no Democrats or Republicans, just community coming together to help animals in need and provide a loving and safe environment until forever homes are found.  Last year, there were 804 adoptions.  That’s 804 happy endings and new beginnings. If only the rest of the world could learn from the Newberg Animal Shelter.

Watch a short History of the Newberg Animal Shelter here.

Got some spare time??  Consider volunteering at the animal shelter near you.

“The Art of Noticing” a Book

When All Else Fails, Bake a Pie

Trying to Keep the Glass Half Full

Surviving a Heat Dome In Oregon

‘Tis the season of Garlic Scapes

Annerose Georgeson
Enchanted by the Wild

Myths, legends, folklore and tales from around the world

An exploration of Harry Smith's Anthology of American Folk Music

Longing for "the endless immensity of the sea"

Poetry From the Heart!